Leeward Theatre at Leeward Community College was founded in 1974 as a gathering place for arts and culture in Central Oahu. The mission of Leeward Theatre is to facilitate cultural dialogue by presenting and developing the work of local, national, and international artists and sponsoring educational and community performances. We are advocates for the cultural sustainability of our community, with a special commitment to local artists and Native Hawaiian culture. Leeward Theatre is the only major arts presenter and arts education center in the Leeward and Central Oahu communities.

Our lobby mural was commissioned by the State Foundation of Culture and the Arts, Arts in Public Places program. The work is 23 feet high and 104 feet long and it took Jean Charlot and his team three months to complete (from February 14 to May 17, 1974).

Jean Charlot was a distinguished artist and teacher, known primarily for his sculptures, murals, and frescos. He was born in Paris in 1898 and lived in Hawai’i from 1949 until his death in 1979. Leeward Community College is very fortunate to have one of his greatest works done in fresco. It is one of the largest works he ever created and it reveals his love for Hawai’i and the Hawaiian people. 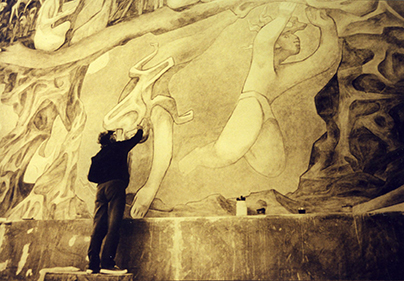 Fresco is the Italian word for fresh. In art, fresco painting is a method of painting on plaster while it is still wet, or “fresh.” The colors amalgamate with the plaster during the drying process and the painting literally becomes part of the wall. Charlot was a member of a quartet of muralists who set the modern standard for this art form in the 1920’s. This group of artists also included Diego Rivera, David Alfaro Siqueiros, and José Clemente Orozco.

Don grew up in the Territory of Hawaii after circling the globe with his family, and began working at Leeward Community College Theatre in 1977. He has a BA degree in English from Chaminade University (then Chaminade College), and an MFA in Theatre from UH Mānoa. Don has worked with and designed shows for just about every theatre and dance company on O`ahu, and his former students have been fixtures on the local theatre scene for decades.

Sarah has been at Leeward Theatre since 1986, when she began as a student worker while pursuing an Associates Degree in Liberal Arts. She also holds a BA in Psychology from UH West Oahu, a Certificate in substance abuse counseling, and is a licensed contractor in theatre. She has won three Po`okela Awards for lighting design at Leeward Theatre. Sarah has three adult children and two young grandchildren.

A gathering place for arts & culture

Volunteering
Due to the covid pandemic, there are no opportunities at this time. Sign up to be contacted for future opportunities.