The CDC’s COVID-19 website and Campus COVID updates and details.

Discover... a volcano, creative art projects, aquaponics, homemade yogurt, cooking with keiki, neuroscience, LEGO, and much more! Due to the coronavirus, we canʻt invite you to our campus so weʻre bringing the FUN to you. We have over twenty FREE hands-on activities that you can do at home. Check out our video library below and remember... DISCOVERY begins at Leeward! Enjoy!

All Discovery Fair videos will be available for viewing from November 1-8. 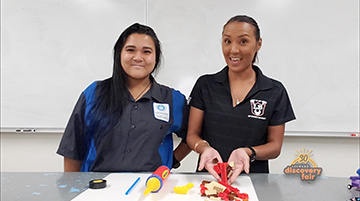 Age range: 3+ (with assistance of an adult) 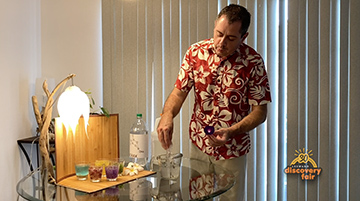 Description: See hydrogen bonding in action. Use this simple recipe to make slime at home using glue and borax. You can even add flowers to give your slime a Hawaiian twist.

Disclaimer: While it is safe to play with slime, ingestion of large quantities can be dangerous. Slime is not safe for unsupervised toddlers. Slime is safe on most surfaces and can even be used to clean plastic, glass, and leather because of its adhesive properties. Slime strongly binds with fabric and should be kept away from it. However, if that happens, you can remove slime from fabric with water.

View how it works! 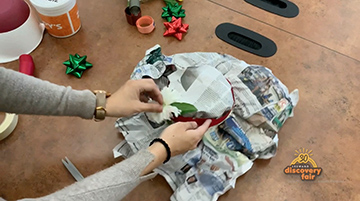 Description: This video demonstrates how to turn recycled newspaper and other items found at home into cute and customizable paper hats.

Age range: Children of any age can take part in this activity, with the help and supervision of an adult. 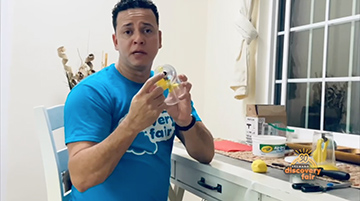 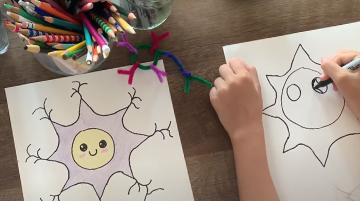 Description: In this fun tutorial, kids and adults alike, will learn how to draw a cute cartoon neuron, while learning about the different parts of the neuron and its functions. It is a creative and memorable way to use multiple disciplines (art, science, neuroscience) to learn a complex topic in a simple way. The hope is to get people excited about the brain and science so they will want to learn more! It uses minimal materials. Best part: It’s easy and fun! 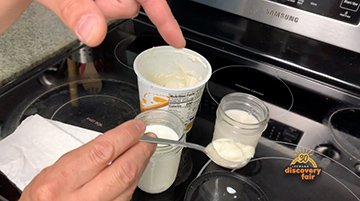 Description: Fermentation is a process in which bacteria and/or fungi turn raw foods into foods that will last longer, are healthier, and taste better! Common examples of fermented foods include kimchi, kombucha, and yogurt.

Yogurt has been around for at least 7000 years, and has been extremely important in feeding many early civilizations. Yogurt is made when a group of bacteria called the Lactic Acid Bacteria eat the sugars in milk, and make lactic acid. The lactic acid curdles the milk proteins, turning the milk into a sour gel-like deliciousness we call yogurt. The process of yogurt making can be complex, but it can also be very simple. The key is to add enough Lactic Acid Bacteria to the milk so that the other “bad” bacteria don’t spoil the milk. And the best source of the “good” bacteria is yogurt.

To make yogurt, all you need to do is to add about a tablespoon of yogurt (I like to use the last little bit of my snack) to about a glass or bowl of milk. Give it a nice mix with your spoon, and then cover with a cloth or a paper towel. Set it aside and wait. Check it every day. If it starts to look and smell funny, that means the “bad bacteria” have won - it’s time to throw this out and start again. If it looks and smells like yogurt, you just made yogurt! You can add some honey or fruits to your freshly made yogurt to jazz it up a little. Enjoy! 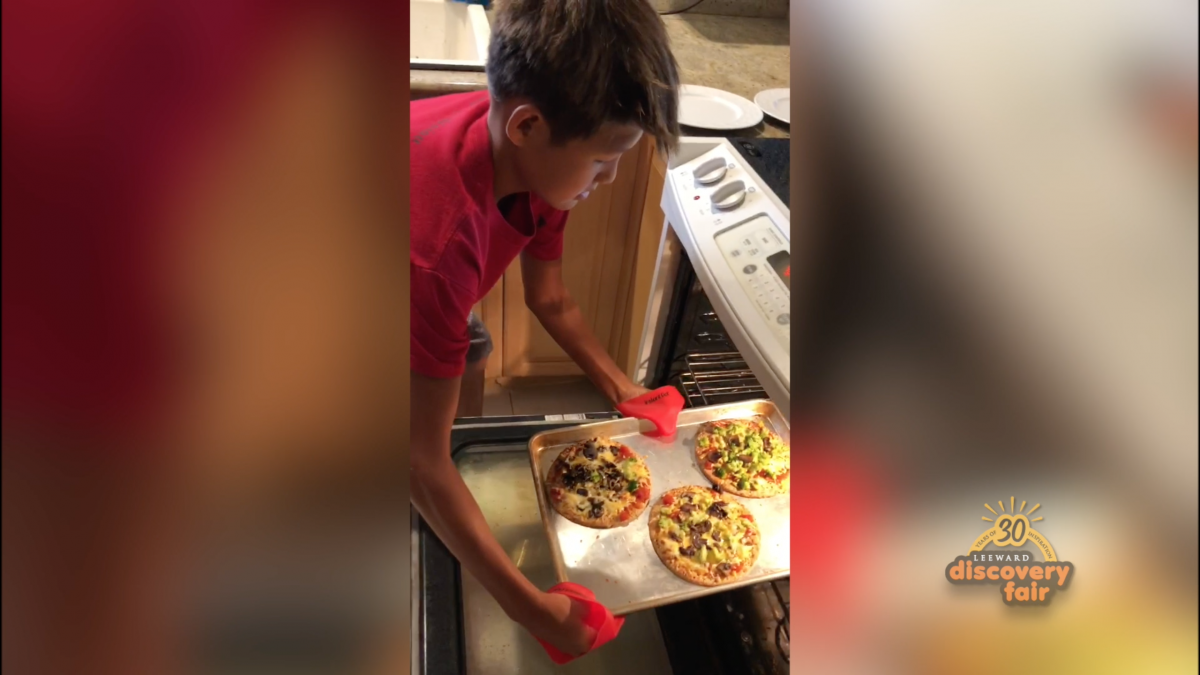 Description: Making homemade pizza is a simple and fun activity you can do with your kids. The options for toppings are endless and kids/adults can customize their mini pies to their hearts’ desire. 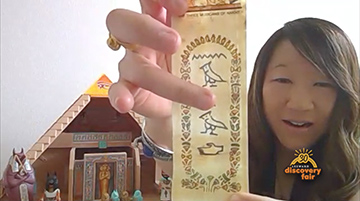 Description: Learn how to write your name in ancient Egyptian. In this video, you will learn basic hieroglyphs and create a cartouche (name circled in a magic protective sun rope). 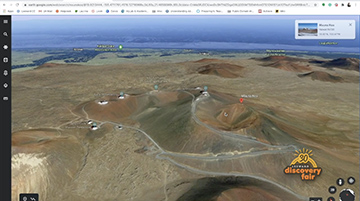 Explore the World with Google Earth

Description: See the world without leaving your home! This short video shows users how to access the browser-based version of Google Earth. Learn how to search for locations, navigate with the street view feature, and measure distances. We explore a prominent and sacred landform in Hawaiʻi to demonstrate these basic tools in Google Earth. This is for everyone that wants to learn and travel! 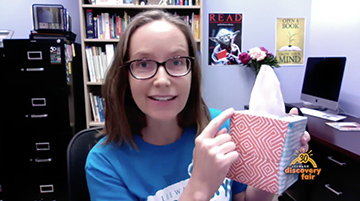 Please note: This exercise is not recommended if you are pregnant or prone to light-headedness or shortness of breath. 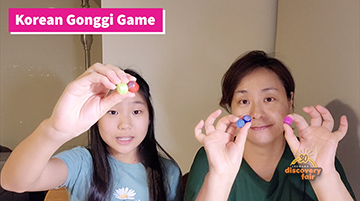 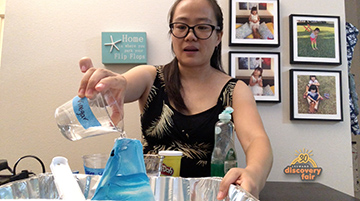 Description: What is a volcano? A volcano is an opening in the earth’s crust that allows melted rock, ash, and gases to come up. In this experiment, we will show kids how to make a small volcano using a fun and educational lesson in a chemical reaction between acetic acid (vinegar) and sodium bicarbonate (baking soda): NaHCO3 + CH3COOH ➝ CO2 + H2O + Na CH3COO. 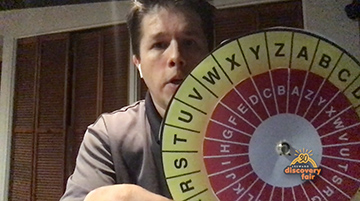 Print your own cipher wheel! 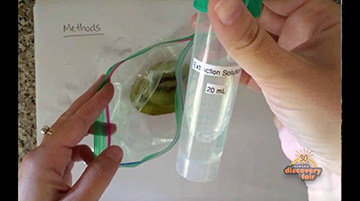 Description: Kiwi DNA uses household items to extract the DNA out of Kiwi (or other fruit).

Why it works: From Biology for a changing world: DNA (deoxyribonucleic acid) is the hereditary molecule that is common to all life forms – from plants to bacteria to fungi – and that is passed from parents to offspring. DNA serves as the instruction manual from which we are built; it’s the reason why you look like your parents, an aunt, or perhaps even a grandparent. Where can you find DNA? The molecule exists inside the nucleus of almost every cell in our body in the form of chromosomes, strands of DNA wound around proteins. In order to isolate DNA from the kiwi (plant) cell, we will need to “break through” the cell wall using the “mushing” technique in which the students squish the kiwi fruit and extraction solution in a ziplock bag. The extraction solution made of soap and salt. The soap destroys the cell and nuclear membranes, allowing the DNA to get out. The salt causes the proteins and carbohydrates to precipitate, while the DNA remains in solution. The baggie is then placed in the ice bath to stop the DNases (enzymes that destroy DNA) in the cytoplasm from breaking apart the DNA. The solution is then filtered through a coffee filter to remove the pieces of the cell we are not interested in, including proteins and carbohydrates. The filtered liquid is then placed in a vial and 2 ml of cold ethanol is added to precipitate the DNA. Each person’s DNA is unique. DNA is made up of two strands of molecules, called nucleotides, linked together in long chains. Each nucleotide has three parts: a deoxyribose sugar, a phosphate group, and a base. The phosphate group of one nucleotide binds to the sugar group of the next nucleotide to form a long strand of nucleotides. Then the two strands of linked nucleotides are bound together and twisted around each other to form a spiral-shaped double helix. The sugars and phosphates form the outside “backbone” of the helix and the bases form the internal “rungs,” like steps on a twisting ladder. The bases are held together by hydrogen bonds. There are four different possible nucleotide bases that make up these “rungs:” adenine (A), thymine (T), guanine (G), and cytosine (C). In DNA, these four nucleotide bases are repeated over and over, billions of times, in different combinations. With the exception of identical twins, no two people share exactly the same order of DNA nucleotides.

Description: Pi (π) represents the ratio of a circle’s circumference to its diameter. It’s what mathematicians call an irrational number. Its decimals keep going on forever. We’re going to use these numbers to create some art.

Description: In this video, you will learn how to make paper balloons. This activity promotes creativity and sustainability and brings families together. This activity can be done on any occasion, and is a great activity for parties, family get togethers, or as a school art activity.

Age range: For ages 5 and up 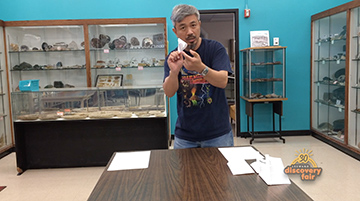 Description: Construct a cool noise maker that will give a nice loud bang when popped. 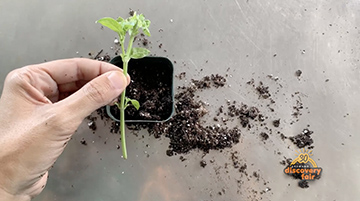 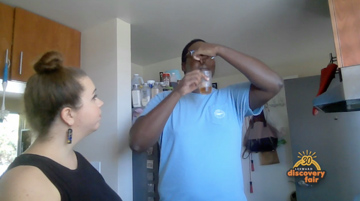 Description: Sensory Illusions are ways we can trick our senses and our brain.

Age range: This video is most appropriate for people approximately 8 years old and up, although there's no harm in watching if you are younger. 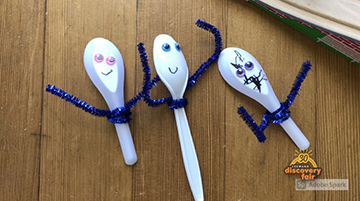 Description: Making fork/spoon people is a great activity for children ages 3 to 5 years old. Children can make them and then engage in pretend play. 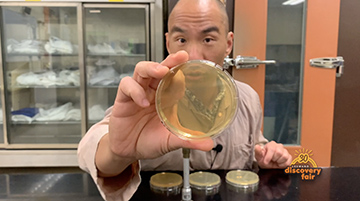 Sugar is bad for your teeth!