The CDC’s COVID-19 website and Campus COVID updates and details.

Office of the Dean of Arts & Sciences - Fall 2013 Convocation Remarks

Working with State Senator Michelle Kidani, Leeward CC’s Admin Team, and Hālau Coordinator Aulii Silva, our Faculty Senate’s Legislative Relations Committee Chairs Eiko Kosasa and Momi Kamahele helped to secure $2 million in CIP planning and design monies for a "Native Hawaiian Center for Excellence."  Earlier that semester the Hālau had won a competitive Title III grant for $2 million over the next two years to increase the number of Native Hawaiian students in STEM related degree programs and to increase the success of those students in STEM courses.

As a way of supporting the goals of the Title III grant, Aulii Silva collaborated with Michael Reese, ASNS Coordinator, to provide Math & Science faculty opportunities to participate in activities with the faculty and staff of the Hālau to foster the incorporation of more “place-based” learning in the STEM disciplines.  So far those activities have included working on the 800 year old fishpond, Loko Ea, in Hale‘iwa, clearing debris for nesting native endangered birds in the Ewa wetlands, visiting recently discovered Hawaiian archeology sites in the Kunia hills, pulling invasive weeds from the forest at the summit of Mt. Ka‘ala, and before Nainoa Thompson embarked on his four year round-the-world voyage in May, touring the Hōkūleʻa and Hikianalia. 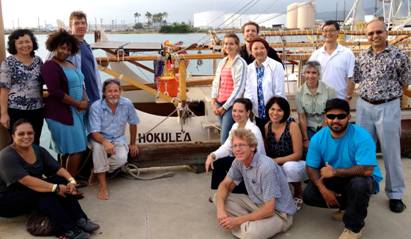 These off-campus activities were complemented by a visit and talk at the Hālau with Dr. Michael Chun, former President of Kamehameha Schools, as well as several other important speakers throughout the year.  During the coming year, the Title III group will continue to visit sites and learn from cultural practitioners to incorporate more place and culture based learning in STEM areas. 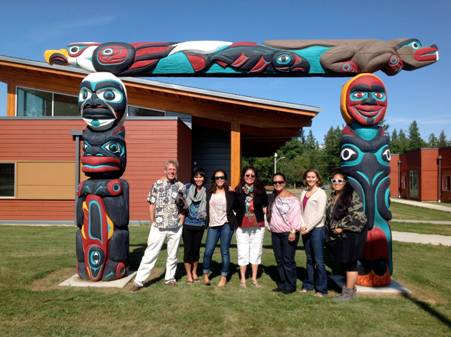 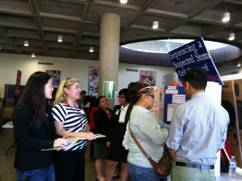 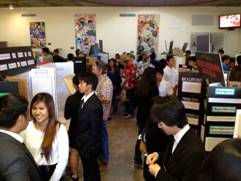 With Biology Assistant Professor Helmut Kae serving as the Regional Director, Chemistry Instructor Brad Ashburn as the Finals Tournament Director, and the assistance of many of our Math & Science faculty, Leeward hosted the Hawaii State Science Olympiad, which involved more than 600 students from public and private middle and high schools.

Under the guidance of Engineering instructor Nikolaj Nordkvist, 10 Leeward Physics/Engineering students participated in the annual CanSat Competition, sponsored by the American Astronautical Society and American Institute of Aeronautics and Astronautics.  For the first time, six students of Leeward’s newly formed Ka Lewa ‘Imi Loa team travelled to Abilene, Texas to compete in this international rocket contest, earning 8th place among 22 colleges and universities! 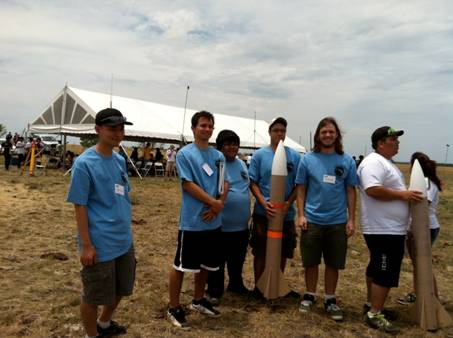 The Information and Computer Science (ICS) department is nearing completion of an articulation agreement with Capella University (http://www.capella.edu) and are in talks with UHWO to create a 2+2 program.  In May Blanca Polo participated in the annual NCWIT (National Center for Women in Information Technology) workshop in Tucson, Arizona and since, the ICS department has become a member of NCWIT with the goal of increasing the number of women and other students underrepresented in STEM fields, particularly in ICS.  During the last two years Michael Bauer has been participating in the Oracle Academy training programs and now Leeward's ICS department a member of the Oracle Academy, an online resource that help students prepare for careers in fields such as computer engineering, application development, web development, IT consulting, systems integration, database design/administration, IT product management, IT product marketing, technical support, and more.

In July, the ICS department participated in the Cyber Range that took place at UH Manoa; Vince Lee was pivotal in organizing the event, while Pete Gross helped to create injects to attack the networks (http://www.hawaiinewsnow.com/story/22927049/cyber-range-training-center-... ).  Vince will also be involved in the next phase of the UH cyber range and he is currently slated to be on the red team for a Federal Cyber War Games in Washington D.C. Vince is in the planning stages of testing out cyber curriculum from Symantec.

Lastly, Vince and Blanca Polo met with the other UH system computer science department heads, electrical engineering faculty, David Lassner, and Jodi Ito at the Manoa campus to plan all the security courses university wide.  We will be forming a common approach to help our students be better security specialists and learn to defeat hackers.

This Fall, the Math & Sciences division welcomes Darci Miyashiro as the new Math Lab Manager and Heather Takamatsu as their STEM program counselor--advising primarily transfer students in our ASNS program.

In continuing to build a process for regular and on-going evaluation and assessment of our Associate in Arts (AA) degree, last Spring I requested of the Faculty Senate to recommend a faculty member to serve as a “AA Program Review Coordinator.”  Their recommendation was Eunice Brekke, who currently serves as the Senate’s Program Review chair and spearheaded the writing of the senate’s report on the Assessment of the Associate in Arts Degree at Leeward Community College (2005-2010).  Eunice will work directly with the OPPA, the AA Program Review Committee, and me in the development of a systematic process that will best assess the effectiveness of our AA degree.

In AY 2012-2013, there were 477 AA degrees awarded, 8 Associate in Science in Natural Science (ASNS), and 1 Associate in Arts in Hawaiian Studies (HWST) degrees; the latter two programs having only been established on our campus for less than a year.  Currently there are 145 declared ASNS students and 26 declared HWST majors.

Student and faculty support of the Writing Center services continued in the 2012-13 academic year: writing consultants worked with students in approximately 3,225 individual sessions (an increase of over 30%) and approximately 170 in-class workshops.  As in semesters past, they worked with students and faculty from every division on campus.  In Summer 2013, the Writing Center again provided COMPASS brush-up support and also launched their new “focused workshop” service--providing over 200 workshop services in addition to over 150 individual sessions and a half dozen in-class workshops.  The “focused workshops” will continue to be offered in Fall 2013 to provide focused support on key areas in college success skills (such as time management and test preparation), reading skills (such as comprehension and critical thinking), and writing skills (such as sentence errors, punctuation, and verb tense).  In DevEd math, where the DevEd sequences were reduced to just two levels, 70% of students passed Math 18 and 48% for Math 82.  This coming semester the DevEd math faculty will be exploring strategies that will increase student success for the Math 82 courses.

Assisted by our Office of International Programs, Yumiko Asai-Lim and Kazuko Nakamitsu received $58,200 from the Japan Foundation Center for Global Partnership and took 20 Leeward students to Japan on a one-week Study Tour, visiting Gifu and Nanzan University, attending lectures, interacting with Japanese students and touring historical sites in Nagoya, Gifu, and Kyoto. 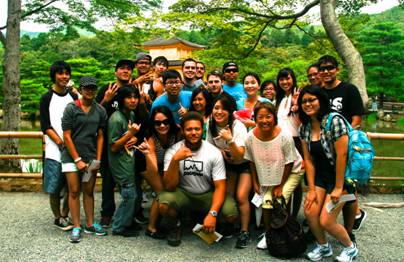 From Arts & Humanities, Susan Lum and Michael Oishi produced another successful Semester of Shakespeare program last April, including performances by The Royal Hawaiian Band, Andria Tupola's Leeward CC Choral Group, and actors from the Lab Theater production of Twelfth Night.  This Fall, Betty Burdick will be directing The School for Scandal by Richard Brinsley Sheridan. 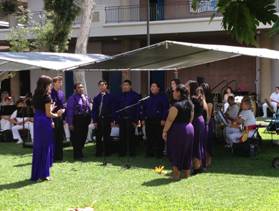 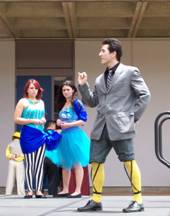 The Associate in Arts in Teaching (AAT) program received a $2.5 million dollar Trade Adjustment Assistance Community College & Career Training (TAACCCT) grant focusing on three initiatives: to Expand, Enhance, and Accelerate the AAT degree.  In the Fall, this accelerated 18 month AAT degree program will begin with a cohort of 12 students.  Last May, the first graduates of AAT’s Alternative Certification for CTE Licensure Program received licenses from Hawaiʻi Teacher Standards Board in CTE Industrial and Engineering Technology, allowing these CTE professionals to teach in DOE schools.  In the Fall, 8 new candidates will begin the course of study with 4 on Oahu, 3 on Maui, and 1 on Kauai.   Also, a UHCC system MOA has been finalized with the DOE and Kamehameha Secondary Schools to award transfer credits to Leeward CC for ED 100, Introduction to Education and Teaching.  This agreement will solidify the 2 + 2 model, the high school to college connection.  The Principal’s Luncheon will be held on Friday, September 20th at the Pearl, celebrating the AAT program’s partnerships with K-12 DOE schools.

Our Office of International Program has reported that for the first time, our international student enrollment has broken the 100 mark with 115 students, from 22 countries enrolled in their English Language Institute.  Becky George was elected President-Elect of the national organization American Association of Intensive English Programs (AAIEP) this past March and Steve Jacques is serving as Chair-elect this year for Region XII NAFSA Team, which serves Hawaii, California and Nevada.  Congratulations Steve!

As we enter a new academic year, I would like to thank all of the Arts & Sciences division chairs Kay Caldwell, Jennie Thompson, Jim West, and Wes Teraoko, and the program coordinators Bobbie Martel, Michael Reese, Tracie Kuʻuipo Losch, Blanca Polo, Aulii Silva, Eric Matsuoka, Ann Berner, Laurie Kuribayashi, Becky George, and all the other faculty and staff for their great work and commitment to student success.

To all the faculty and staff, have a great semester!